Ardania is a medieval fantasy world first introduced in Majesty: the Fantasy Kingdom Sim. It is the setting for Heroes of Ardania, which is based on the Majesty series.

All began with the World Birthing.

From the vast nothing, Krolm brought everything into being. He presided as the singular Master of Ardania’s dawn. While he was pleased with the endless details of this newly crafted wilderness, something was still missing. Self-admiration for his accomplishments was not enough. He brought humankind into the world so that they may take joy in his creation and revere his might and skill.

Ardania’s countenance was still blanketed in darkness and tumult. To soothe this harsh realm of storm and fury, Krolm divided his essence. The result was Krolm’s two children: Helia, the eternal Sun, and Lunord, the everchanging moon.

Helia and Lunord frolicked across the skies, and the people of Ardania watched with admiration. The new gods delivered many gifts — the gifts of civilization. Soon, many of Ardania’s people turned away from Krolm, in favor of the promise of these new gods. Krolm grew jealous and instructed his remaining faithful to forever shun the trappings of civilized life.

As civilization evolved, so did the heavens. In the time of the great King Sydrian, four more deities vied for the spiritual allegiance of Ardania’s faithful. These children of the new gods included Krypta, Goddess of Death; Dauros, God of Law; Fervus, God of Chaos; and Agrela, Goddess of Life. And thus the seven gods and goddesses of Ardania came to be.
— "Spirit of the Land", Majesty game manual

According to the story "Spirit of the Land", Ardania was created by Krolm. After creating the realm, he then brought into existence humankind, who came worship and revere Krolm's power. The first humans lived a simple nomadic lifestyle and became known as "barbarians." Afterwards, the barbarians came into conflict with the Dragons. With the assistance of a sword forged by the Dwarves, Krolm slew the dragon king to return peace to Ardania.

After the war against the dragons, the exhausted Krolm retreated to recuperate, during which he begot a son and daughter named Lunord and Helia. It was now that city-state civilizations first began, over a thousand years after the first barbarians of Krolm. Rendishire and Garuta became the two most powerful states. As time passed, the former came to patronize Lunord while the latter supported Helia. The two factions engaged in a long, destructive war until both sides were finally defeated by the original barbarians who dissented from city lifestyle. However, none of the threes sides were able to impose rule on the land. The destructiveness of the war caused a great recession in civilization and the emergence of greater evil led by Scrylia, the serpent queen, and the malevolent Witch King. During this time, Lunord and Helia sired seven children, including the four younger gods (Fervus, Krypta, Dauros, and Agrela, deities of Chaos, Death, Law, and Life, respectively), as well as Grum-Gog, the dissident god of the Goblins. The final two children were Rrongol and Url-Shekk, both monstrous yet too weak to be a god. Abandoned by Lunord and Helia, Rrongol and Url-Shekk roamed the lands for decades.

The Rendishire-Garuta war allowed Grum-Gog, Scrylia, and the Witch King to take advantage. Each had his or her own plans of domination but were ultimately set back. Grum-Gob's goblins never gained the upper hand in war against the humans, Scrylia's serpent forces were ultimately decimated due to rebellion within the ranks, and the Witch King's minions were eventually beaten by Sydrian and his knights. Victory over the evil forces effectively restored order to Ardania. It was now about a thousand years after the flourishing of the old city states. But neither Lunord nor Helia had the will to reestablish their lordship over the Ardania. Rather, the followings of the two gods gave way in favor of their four powerful children. Temples to the four new gods grew in numbers while the followers to the old gods Lunord and Helia were shunned by the rest. Followers of the even older Krolm persisted, but their numbers were few compared to the days of the old. Among the four newer gods, due to differing ideologies, the followers Fervus and Krypta polarized from those of Dauros and Agrela.

In the face of such revival in civilization and religion, new challenge arose for the Ardanians. The revival of magic, largely abandoned for two thousand years, resulted in the creation of the first undead when a high priestess of Krypta who later became known as the "Liche Queen" misused her powers and sworn defiance to all things living. Newer monsters such as Black Phantoms and Minotaurs began appearing. Many of the new menaces, such as giant spiders and the Oculus, were due to dark sorcery.

At the start of Majesty, Ardania is a fragmented realm with many factions, but the entire continent is gradually unified by the sovereign, the role that the player takes in the game. During unification as depicted in the game, the sovereign defeats Rrongol, Url-Shekk, the Witch King, the Liche Queen, and an avatar of Krolm. By the end of The Northern Expansion, the sovereign has further extended rule to cover the northern part of the content.

Heroes of Ardania is set sometime after the events of The Northern Expansion.

After Majesty: The Northern Expansion, Ardania was featured in Paradox Interactive's titles, which include Majesty 2: The Fantasy Kingdom Sim (2009) and the Warlock series (2012 and 2014), among others. Storylines in these titles are not referenced in Heroes of Ardania.

Majesty 2 takes place 500 years after Ardania was unified. Since the unification, many celebrated kings ruled and vanquished many legendary foes. The last king, Leonard, however, had no enemies left to conquer, and became worried over his place in history. He summoned a powerful demon in an attempt to banish it and win renown himself, but the demon killed the king and usurped his throne. Under the demon's rule, Ardania crumbled and fell back to its chaotic past, and many pretenders tried and failed to win the throne. Under this setting, a "true heir" to Ardania sets out to defeat the demon and purge the realm of evil.

There are eight main deities in Ardania: 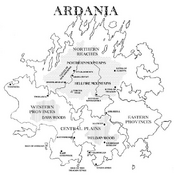 Map of Ardania in Prima's Official Guide for Majesty 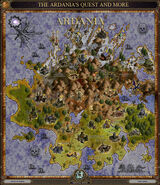 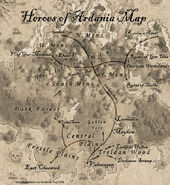 Annotated map showing locations depicted in Heroes of Ardania, based in part on fan interpretations (for more information, see Map of Ardania)

At the time of Majesty, there were two canonical stories on the background of Ardania:

The two sources have a few differences in the portrayal of Krolm and the development of the pantheon. "Spirit of the Land" describes Krolm as more powerful, portraying him as the creator who begot two children to divide up his rule. "History of Ardania," on the other hand, does not explicitly credit Krolm as the creator of the world but begins the story by describing Krolm's loneliness in a time when the "land was young," where there were no humans and "no creatures knew of him." In addition, History of Ardania describes the role of Krolm's weakness after the battle with the Dragon king in bringing about the next generation of gods and does not mention Grum Gog, Rrongol, and Url-Shekk as offspring of the gods. The two sources do not necessary contradict due to the brevity of one and the thoroughness of the other, but differences in emphasis is readily seen.

Community content is available under CC-BY-SA unless otherwise noted.
Advertisement